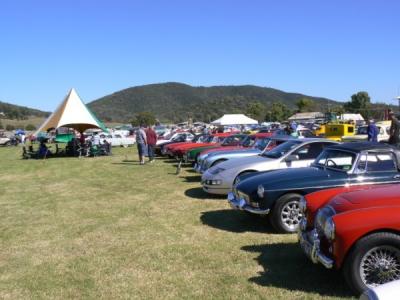 The Australian Sporting Car Club (ASCC) was originally formed in 1930 under the name of the New South Wales Light Car Club Limited. It was formed by a group of car enthusiasts who wished to create a Club primarily devoted “to promote and foster the interests of owners of motor cars and free discussion of all matters and questions relating to or affecting the interests of owners of motor cars”. It also undertook the responsible organisation and conduct of all forms of motorsport in New South Wales, including racing at Maroubra and Penrith Speedways and later, Mount Panorama at Bathurst, until all such activities were suspended during the World War ll years. In 1945 the Club’s name was changed to the Australian Sporting Car Club Limited, in view of the expansion of motorsport activities throughout Australia on a wide national level. The ASCC resumed organising racing at Mount Panorama, as well as at Parramatta Park and later, national and international events at the Gnoo Blas Circuit in Orange. In 1953, the ASCC became directly instrumental, as one of the longest established and experienced Clubs in Australia, in the formation of the Confederation of Australian Motor Sport (CAMS). The same year, the Club commenced to organise the Redex and later Ampol Around Australia Trials and was to go further into the realms of fully internationally recognized events with the Club’s South Pacific Road Racing Championship and Southern Cross International Rally Series. The Club was re-established in 2001 and is now specifically oriented towards providing social outings for like-minded sports and sporting car owners, primarily in the Central West of New South Wales. However, we have members across a large area of New South Wales, Sydney Metropolitan area and the ACT. The club has now become incorporated and is fully recognised by the R.M.S. (formerly the R..T.A.) for the issue of Conditional Registration for historic vehicles. It is also an affiliated member of the Council of Motor Clubs Inc. which gives our members access to activities organised under their umbrella. As a member of the ASCC, you will be kept informed of all our activities, as well as those organised by other co-operating clubs, by monthly electronic newsletters, which are planned to provide something of interest to both members and their partners alike. Should you, or other sports car enthusiasts known to you, wish to take part in this enthusiasts Club, please contact the club.